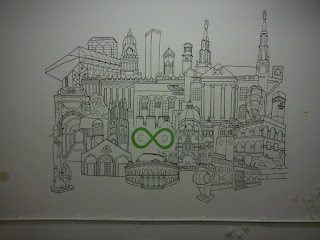 Spent last weekend drawing the above on the wall at Cinco Digital headquarters, which was both fun times.. and seemingly v.well received.  For those that know Leeds, you may recognise some of the buildings, and that's Cinco's logo in the middle.
The photo (taken on my phone) is a bit shoddy and doesn't really do the scale justice.. but you get the idea.  Did try to time-lapse the creation, but the camera for this was suicidal and kept jumping around, causing the video to be a bit jumpy/distorted.. So here's a work-in-progress photo that documents mid-creation instead... 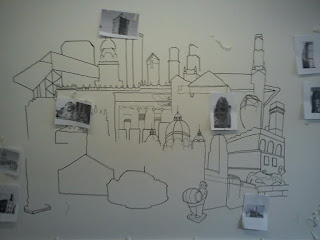 Laurie
Thinking, sharing, supporting, exploring.. and a little bit of drawing. Get in touch by emailing lauriew@hotmail.co.uk or for more stuff go to www.lauriewoodruff.com My illustration is © Laurie Woodruff